Did you know that three-year-olds are capable of piloting a Sunfish?

Neither did I. Which is why I’m, once again, grateful that James is around. We found a spot with a small beach on the York River. (I can’t tell you more because, as we found out a week later when we went back, you cannot launch boats from this particular spot on the York River. Whoops.) We brought our Sunfish, an umbrella, and snacks to feed an army (or a family of 4 looking to spend the day at the beach).

James’ not so secret goal was to get me out and piloting the Sunfish. Sleep deprivation and highish winds kept me on the shore, despite his reassurance that we were on the leeward shore so the wind would just end up blowing me towards the shore if anything were to happen.

As they were running downwind, I couldn’t help but notice that the person in the bow of the boat looked a lot bigger than a three-year-old. And sure enough, there was James in the bow and Mattie at the helm, concentrating hard on steering the boat home.

As James mentioned, this isn’t our first boat restoration rodeo. When our first son Matthew was 6 months old, we purchased a mid-80’s Merit 23 that needed a serious amount of work. The entire hull needed to be redone. Honestly, I’m not sure I would have agreed to the purchase of the boat had I known exactly what “soft hull” was and what the repairs would entail.

Chalk this up to why naivete can be a good thing for boat owning newbies.

What followed the purchase of the Merit was months of James covered in epoxy as he filled in the hull to prevent further structural failure. Months of evenings spent alone with our kiddo while James buried himself in the boat.

It was not fun. Newborns are hard people! Boats are hard! Apparently, somehow, we thought we could do both.

Thank goodness we were that naive.

The boat project was a beast, there’s no getting around that. But the payoff was immense. For an entire summer, we had weekends full of fun for only the cost of a lunch that we could take aboard. Thanks to the Merit and my husband’s duty station at the time, USCGC Tampa, our eldest son grew up as comfortable walking on boats as he was walking on land.

He first experienced swimming in a river, which, in my mind, is hands down the best place to swim.

We saw dolphins and huge container ships and other sailboats on a regular basis, which in the world of a one-year-old is freaking awesome.

So it is with some sadness that we say goodbye to the Merit, named Proteus but never christened.

But, I’m not gonna lie, I’m really looking forward to not having to pee in a bucket.

Her maiden voyage under sail is complete. Sadly, I was unable to be there for it but James shanghaied a few neighbors with sailing experience for an impromptu sail while the boys and I were at a family reunion in South Carolina. Lucky thing we weren’t there! The roller-furling apparatus still isn’t entirely functional so it took everyone’s best efforts to get her underway and going, but it worked! Our boat sails! As James put it, “We no longer have a motorboat with two masts.”

I wish we had some pictures from the maiden voyage but, alas, I was not present and James was busy making sure nothing disastrous happened so there are none.

So, to appropriate a meme that’s been going around, I present:

What our friends think the maiden voyage was: 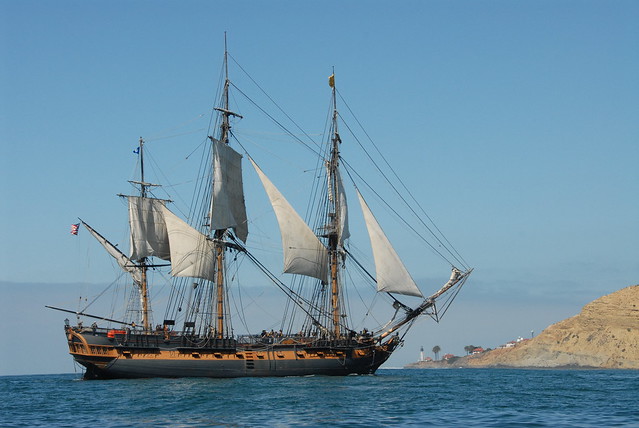 (photo by Port of San Diego)

What James thinks the maiden voyage was: 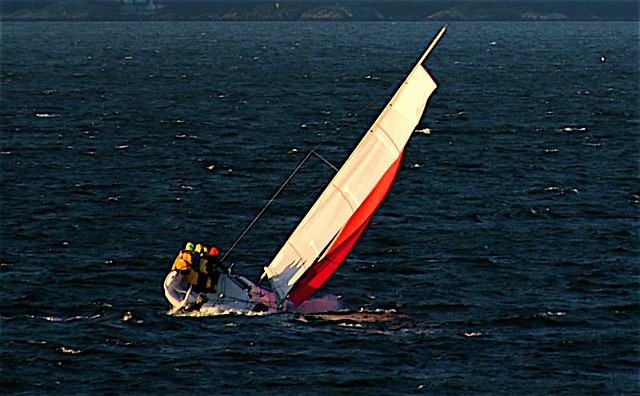 What Carrie thinks the maiden voyage was: 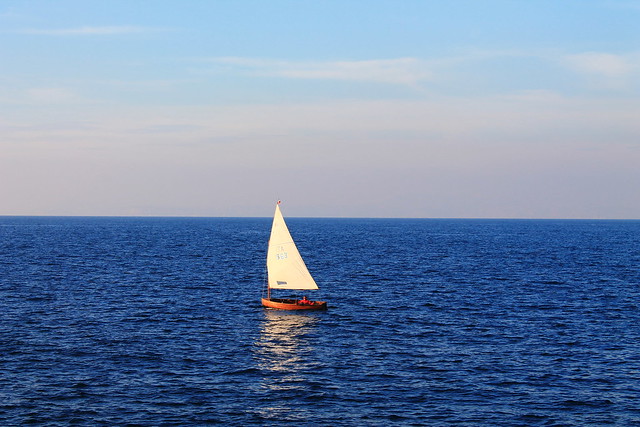 What the maiden voyage actually was: 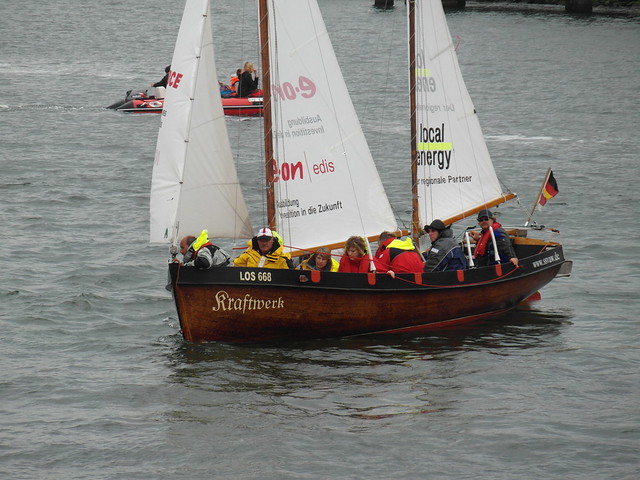 All photos used under a Creative Commons license.

We’re beer and pretzels rich, not Hinkeley/Morris rich and were staggered by the cost of trying to replicate original equipment Toerails and Taffrail on Hull #9.  I spent a lot of time working with various local timber suppliers and decided Cumaru stock would be my most economical choice.  Here’s what I learned…

Cumaru is HARD!!!  Nails bounce right off it!  Planes gouge it!  Plan to sand sand sand! Cumaru is oily!!!  Rub your hand on a finished piece and it leaves your hand waxy.  PU varnish doesn’t stick to it! PU glue can’t bond it.  Glue with epoxy after an acetone de-oiling. To finish it bright, you must first shellac it.  Shellac stabilizes the oil present in the Cumaru, bonds to it/with it and seals the piece.  2 coats of 1/4 cut shellac, then on to polyurethane!

For now Cumaru is cheap, and pretty.  Easily sourced in 1″x6″x16′, it is being used for outdoor decks in high end homes.  My old man (who worked for Back Yard Boats in Alexandria VA in ages past) couldn’t initially tell it wasn’t mahogany.

Regarding the toerails, Dad and I scarfed them together (8 to 1) and bent them.  I glued with PU glue and the more stressed scarf joints came right apart.  We remedied the scarf Joints with big clamps and epoxy. The bend is easy, the Cumaru followed the twist nicely in the thickness we used.  Our toerail is not, however, remotely as robust as the original at 1″ wide by 1.5″ high.  If time weren’t an object and “full restoration” were my goal, I would use a series of strips in these dimensions to laminate as I went along, building off of a strip bolted to the gunwhale, and shaping as I went along to achieve the needed dimensions.  Cumaru is available at Portsmouth Lumber in Portsmouth VA for decking applications.  I don’t recall the board foot price but bought 100ft linear of 1″x6″ for under $100.

Carrie took a hand in this project too.  She cut all the plugs for the rail, while I held a baby.  I was proud of her for taking on some new tools and processes.

Ack! You guys! I’m so sorry. WordPress tells me that people are coming to this site (yay!) but I’ve been incredibly lax in updating it (boo!). The husband, aka boatman extraordinaire, has been deployed with his Coast Guard unit for almost two months so my focus has been elsewhere. However, he has been writing avidly (well, for him) so here is the first of his missives about fixing up our baby:

Step one of making Hull #9 into our dream boat was to make her ready for sea. The biggest problem faced was that #9, formerly “Phoebe M”, formerly “Carousel” was on the hard, 70 miles from our home in Portsmouth, Va. (Editor’s note: 70 miles!?! I had no idea it was that far away! What were we thinking??) We were faced with some hard decisions. 10 years on the hard and her age had done her hull coatings no favors. While she was structurally sound, she was a mess of gel coat failure and untried systems. We made the difficult choice to try and remedy as much as we could while she sat on the hard. It meant a lot of driving. As we saw it, dry and on the hard is ready for hull coatings, so armed with the foreknowledge of many dinghy restorations and one baby keel boat, we set to work. I took a couple of weeks off from keeping a Coast Guard cutter in good shape and started working on our yawl. First steps were aided by friends Cole and Zach, neither of whom are boat wrights per se, but neither of whom shirk when grunt work is called for. Cole helped with a serious cleaning of existing surfaces, and Zach wielded a random orbit sander the following weekend. I can’t thank those fellas enough.

The following week, I degreased the hull one last time and began coating. The primer used was Interlux Epoxy Primecoat. It had a mixed consistency like heavy cream, sopping into the crazing and pinholes very well, and floating on top of itself to level the surfaces.

“All is well”, I thought to myself that first day, but the following morning’s sanding session revealed that there was still fairing work to do. One of the joys of epoxies is the fact that you can fair in between coatings with a minimum of fuss.  After washing off the dust and prepping with Interlux’s proprietary solvent, I faired deep scratches with glazing compound, sanded, glazed again, sanded again and solvent washed.  The second prime coat went on smoother than the first and, after a very long day, I headed home to Carrie and the boys.
========
It is amazing to me how each morning arriving at the boat feels fresh and new.  Even knowing that the days work entails more of the same drudgery, sanding sanding and more sanding. Cutting a tooth into the second prime coat was excruciating as I knew anything less than perfect would reveal itself in the topcoats. There were flaws… There are always flaws. It is one of the beauties of boats, the fact that if you aren’t satisfied, you can look forward to a haulout a few years hence and know you can take another crack at it. When you do, you’ll have another set of experience and you KNOW, it’ll be even better.

I used Interlux Perfection, “Flag Blue.” It color coated very well, with high pigment saturation in the first coat. I returned the following morning, roughed up the first topcoat and began finish painting. I rolled and tipped (not for the first time, I suggest practice before going about this process.) and ultimately was pretty satisfied. After a couple of hours cleaning up my debris, I did a rash thing and painted in the bootstripe while the Perfection was still tacky, using Petit Easypoxy white. I was really impressed with this paint. It flowed well and covered like a dream. I used a long, aluminium batten to mask, laying the edge of the batten into the bootstripe scribe.  Local yard neighbors jaws dropped when they saw me start laying the stripe without taping off!

After 3 long months of waiting, 1 long week of work by my dedicated husband, and 1 day of transiting from Gloucester, VA, Allied Seabreeze Hull #9 made her way to her new home at Newell’s Boat Works in Portsmouth, VA. We celebrated with a pizza party on our slip neighbor’s boat watching our eldest explore all the nooks and crannies while my husband sat sitting on the dock with an exhausted, slightly stupid grin on his face. I couldn’t have imagined a more perfect way to end the first long chapter of this project.

If this feels like you’re entering in the middle of a story, don’t worry. You did but it’s easy to catch up. Mainly because 1) part one was wholly undocumented and 2) this is the very beginning of part two.

So what’s the story about? This story will be about the restoration and enjoyment of a 1964 Allied Sea Breeze yawl done by a young family. Namely myself and my husband. Well really by my husband. My job is to provide moral support, document the process, and make sure our two sons (ages 2.5 and almost born) are not neglected in the process.

My hope is that whoever comes across this story finds some humor, some inspiration, and a lot of encouragement that, yes, you too can own and enjoy a sailboat with young children!

Because it’s the dead of winter here in Virginia, and because we haven’t exactly taken possession of the boat yet, these first few entries will serve as background as to who we are and why the heck we’re undertaking this project. Stay tuned!